Written by Stacy DeKeyser and illustrated by Frank W. Dormer

Li-Ming stared at the ceramic frog that had once been Lady Hallow.

“Wow!” said a voice behind Li-Ming.

She whirled around, brandishing the blue feather. But then she squealed for joy. “Thomas! You’re back to normal!”

Sure enough, Thomas was his old self again. “I guess when you blasted Lady Hallow, her evil spells all went POOF too.”

“Thank goodness!” said Li-Ming. “I wonder if that means—”

“It sure does!” called another voice. There was Norm, good as new, waving from the second-floor landing.

A loud HONK! sounded from outside. Li-Ming and Thomas ran to the window.

The school bus! And there was Mr. Espinoza, and the entire sixth-grade class.

“We’re all together again!” said Li-Ming with relief.

“Don’t worry,” said Li-Ming. “Those weren’t the real Fundamental Orders.” She pulled something from her pocket. “These are.”

Norm hurried down the stairs. “Aren’t those the spells we found in The Hound of the Baskervilles?”

Li-Ming nodded. “The Fundamental Orders are written on the last page. See? I didn’t notice until a minute ago.”

“William Gillette must have switched the parchments!” said Thomas. “He fooled Lady Hallow! And he protected the Fundamental Orders, just like he said he would.” He patted Li-Ming on the back. “Good show, Watson—I mean, Li-Ming.”

“Iona and Jasper!” said Thomas. “Don’t let them get away!”

But before anyone could grab them, the two cats dashed out the open door and to the picnic pavilion that had once been Gillette’s train station. They perched there atop the stone wall, arched their backs, and hissed.

“Oh, no you don’t!” said Li-Ming, pointing the blue feather at the two cats.

POOF! In mid-hiss, she turned them to stone.

Thomas stared at Li-Ming. “You’re getting pretty good with that feather.”

“I think we’d better put it back where it belongs,” said Li-Ming.

They climbed the stairs and carefully returned the feather to its cabinet in the library. Li-Ming tore a page from her notebook and wrote:

To whom it may concern:

DO NOT REMOVE THIS FEATHER UNDER ANY CIRCUMSTANCES! We used its magic (and our detective skills) to thwart an evil spell to steal the castle. –Anonymous

P.S. Especially do not let any ceramic frogs near it.

P.P.S. This was the best 6th-grade field trip ever!

“Now we just have to deliver the Fundamental Orders to the next Guardian,” said Thomas. “Whoever that is.”

“I hate to admit it,” said Li-Ming, “but his name is right here.” She held out the parchment.

Our rightful place belongs under ye watchful eye of THOMAS

“Me?” said Thomas, blushing. But then he frowned. “Let me see that parchment.” He studied it, and then turned the page over. “My sleuthing instincts were correct. Look.”

Sure enough, there was more written on the other side:

who doth now dwell on Main Street in Hartford

Thomas sighed. “I don’t live on Main Street in Hartford.”

“Then who is the Guardian?” said Norm.

Li-Ming gasped. “I know exactly where this belongs! Maybe we can take a detour on the way back to school.”

They ran down the stairs and through the great hall. Thomas paused to pick up the little ceramic frog. After a quick glance around the room, he set the frog on the enormous stone mantelpiece. “See ya, Lady Hallow,” he said, and he raced out the door behind Li-Ming. As they climbed into the waiting school bus, they waved at Jasper and Iona, who were still perched atop the stone wall of the old train station.

And they are still there.

An hour later, the school bus drove along Main Street in downtown Hartford and came to a stop in front of a Colonial-style church with a tall white steeple.

“This won’t take long,” Li-Ming told Mr. Espinoza. She and Thomas stepped off the bus and walked up the steps of the church. Next to the door, a plaque read:

Li-Ming nodded as they entered the building. “I read about it in a book on New England architecture. He may be buried in the Ancient Burying Ground out back, too.”

“He’s pointing toward the front of the room,” said Thomas.

The two friends walked toward the pulpit and looked around the majestic church. Sunlight streamed through the rows of stained-glass windows.

“Look!” said Li-Ming, pointing at the 200-year-old wooden floorboards. “The cracks between some of these boards are pretty wide.”

Together they crouched at the base of the pulpit. Li-Ming pulled the parchment from her pocket, and slipped it between two floorboards, where it dropped into the darkness below.

“That was a great caper,” said Thomas.

They shook hands. Together they said, “Case closed.” 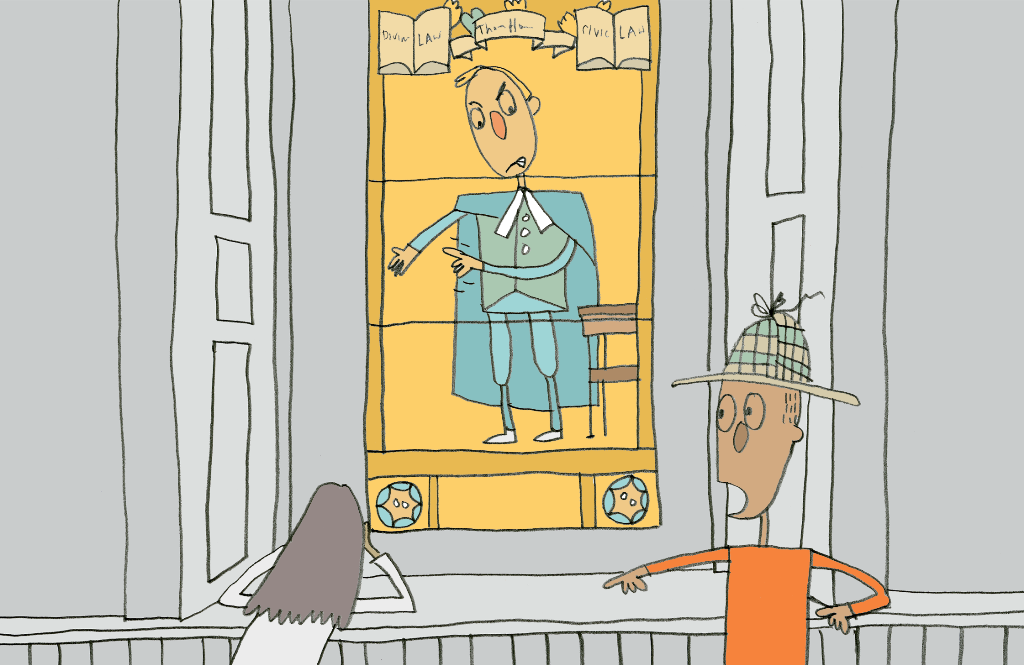 Download a Printable Version of Chapter 12 by clicking the DOCUMENT link below: