Written by Melanie Faranello and illustrated by Patty Weise

When we last saw Thomas and Li-Ming… the parchment rematerialized and was invisible because it sensed that Lady Hallow was near. Gillette leaves to keep the parchment safe as Thomas, Li-Ming, and Norm ran to use Gillette’s spell book to get back home, but instead the spell brought them into the future!

“The future?” exclaimed Li-Ming as the three of them peered through the wooden slats of the balcony at another tour group entering below. The robot guide rolled into the Great Room, made a series of beeps, then spoke. “The castle was restored in the early 2000’s…beep beep…a decade and a half before it was saved by kid detectives from an evil magic spell meant to steal the castle…beep beep…The greenhouse…”

Thomas and Li-Ming grabbed one another. “Did you hear that?!” they said in unison. Norm stood with his mouth ajar.

“That’s us—we’re the kid detectives!” Thomas beamed. “This is the future and the castle is here after all, right? So, we must’ve really saved it! The robot said so!”

Thomas piped in, finishing her thought, “Then we must get back and stop Lady Hallow! It’s up to us!”

“Come on upstairs,” Norm said, “before these tour groups catch up.”

They hurried up the wooden staircase to the third floor. Another robot was coming down the long corridor from the art gallery. They stepped into the library filled with books and glass display cases showcasing various artifacts from Gillette’s life.

Norm unfolded the worn pages containing the spells. Thomas held the wand over them. “Which one should we try?” he said.

Li-Ming’s soft voice called out from across the room. “Uh…Thomas?”

She was staring into one of the glass display cases with her back to them.

“You need to come here,” she said.

Thomas and Norm went to join her. She pointed at a blue feather inside the case. Thomas read the sign below it:

“Wow,” Thomas said under his breath, still beaming. “We need that feather.”

“But the case is locked,” Li-Ming said.

Norm pulled an intricate Swiss Army knife out from his pocket. “Step aside, kids,” he said and worked the lock open. He reached in for the feather and handed it to Thomas. Just then, a series of alarms blared and a robot rolled into the library, flashing red and silver lights. “Thief alert! Thief alert!…”

“Fast,” Norm said, holding the parchment. They huddled closely while Thomas held the wand and read another spell. The castle shook, spinning faster and faster.

Then everything was still. They looked at one another in silence. The robot was gone.

“Do you think it worked?” Thomas said, gripping the blue feather.

“Come on,” Norm said. They took the stairs to the roof. Outside, the sky was red from the late afternoon sun. They were still on Gillette’s land. Through the colorful autumn leaves, a yellow school bus was parked far below. They could see what appeared to be Mr. Espinoza and their classmates on a pathway.

“Look! We’re back in our time! We did it!” Thomas and Li-Ming shouted.

Thomas clenched the feather. “We can’t! If we don’t stop Lady Hallow, the Fae’s spell might be found and we will all be doomed forever!”

“And the future will be changed,” Li-Ming gasped.

“Shh,” Thomas crouched, pulling Li-Ming with him. He pointed to a mirror above the French doors beside the fireplace. In its reflection, standing at the liquor cabinet across the Great Room, they saw a small, hunched figure draped in a long cloak with wiry hair to her feet. She was the most hideous and ancient-looking creature they’d ever seen. She was turning pages of a large book, billows of dust rising, muttering something about Lockwood-Mathews Mansion. 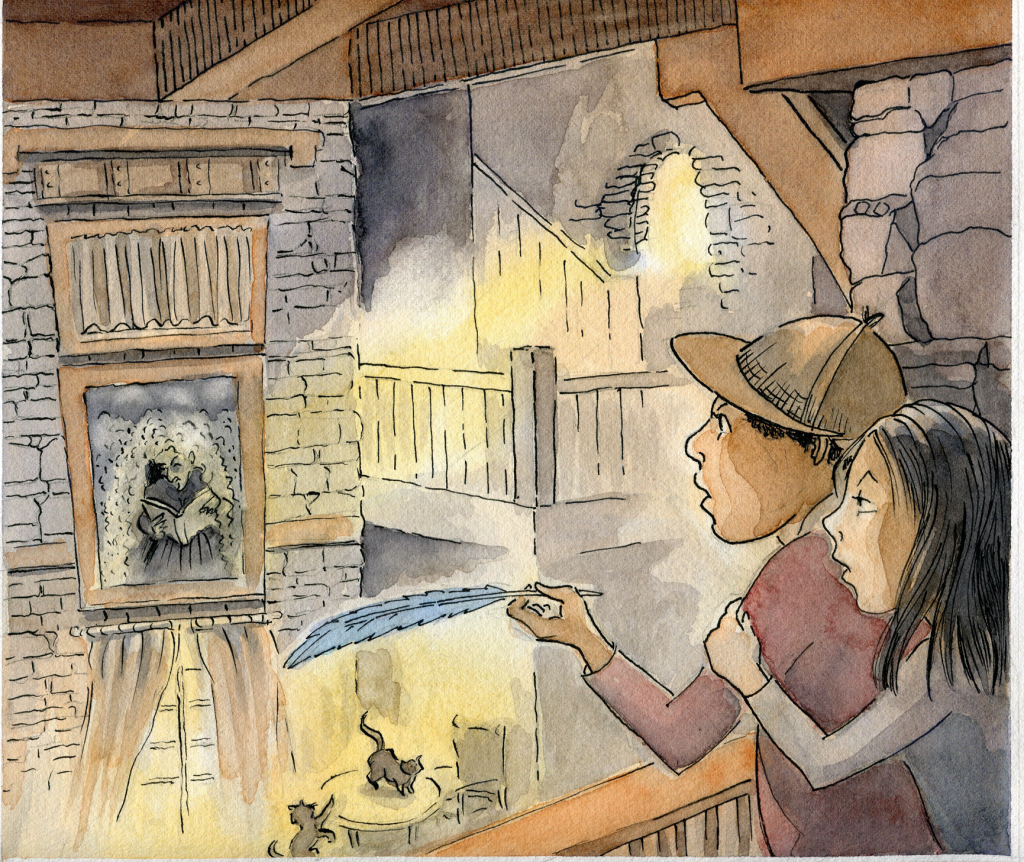 Download a Printable version of Chapter 9 by clicking the DOCUMENT link below:

Chapter 10: Mayhem in the Mansion