Chapter 1: All Aboard the Becky Thatcher

Written by Yelizaveta Renfro and illustrated by Kearen Enright

Thomas and Li-Ming were both eagerly waiting to catch a glimpse of Gillette Castle.

The 11-year-olds were sitting together aboard the riverboat Becky Thatcher along with the nineteen other students in Mr. Espinoza’s sixth grade class. The group had just embarked from Deep River Landing to study the Connecticut River.

But Li-Ming and Thomas, best friends since kindergarten, had their eyes on the land to the right—or starboard—side of the boat and were scanning the yellow, scarlet, and russet foliage for the silhouette of a rough stone castle.

Perched on a stool, facing them, was their guide, a white-haired man named Norm who was speaking into a microphone. He knew the landmarks so well that he could point to them without looking.

“The Connecticut River is 407 miles long, stretching from the New Hampshire-Canadian border south to Long Island Sound,” Norm said. “Its watershed—the area of land that drains into the river—is over 11,000 square miles.”

Thomas glanced over at Li-Ming’s sketch of a castle, complete with detailed blueprints of rooms, and then back at his own drawing of a deerstalker hat and pipe.

“In a minute, if you look two hundred feet up on the ridge to the right, you’ll spot Gillette Castle,” Norm finally said. Thomas and Li-Ming strained forward, waiting.

“Who can tell me who William Gillette was?” Norm continued.

Thomas started to raise his hand, but Samantha’s hand rocketed straight up. As usual, she was sitting in the very front and had all the answers. Li-Ming almost never volunteered to speak up, although she knew all the answers, too.

“He was a famous actor who played Sherlock Holmes and built a castle,” Samantha replied.

“Great answer!” Norm exclaimed. “In fact, Gillette developed the stage role of Sherlock Holmes, based on Sir Arthur Conan Doyle’s stories, adding the trademark deerstalker cap and overcoat that we all recognize today.”

This was exactly what Thomas wanted to hear. Not only was he a Sherlock Holmes buff, but he also planned to become a detective. He was eager to solve serious crimes like his Aunt Rose did as a state police detective, but so far, the only mysteries Thomas had solved were minor and domestic. Who had eaten all the Snickers bars in his Halloween candy last year? His little brother Henry. Who had knocked the glass of milk off the kitchen counter? The family cat, Basil. Thomas wanted to apply his sleuthing skills to a real mystery.

All the students peered expectantly at the riverbank, while Norm, still facing them, kept talking.

“Gillette was also an amateur architect and designed his home himself. He invented tricks for the stage, and his castle is just a big stage set. It looks like it’s falling down, a romantic ruin like ones he had seen in Europe, but it’s actually a modern building with steel-beam construction completed in 1919.”

Li-Ming’s eyes shone with delight. Her dream was to become an architect. Every chance she got, she designed buildings—sometimes even right on her field trip notes or math homework!

“The house has secret passages as well as a surveillance system of mirrors so that Gillette could spy on his guests,” Norm said. “He was quite the trickster. Now, what else do you notice about the castle?”

Samantha tentatively raised her hand. “Umm, I don’t see it,” she said. “It’s not there.”

Norm finally turned to take a look himself. And when he did, his face turned as white as his hair. 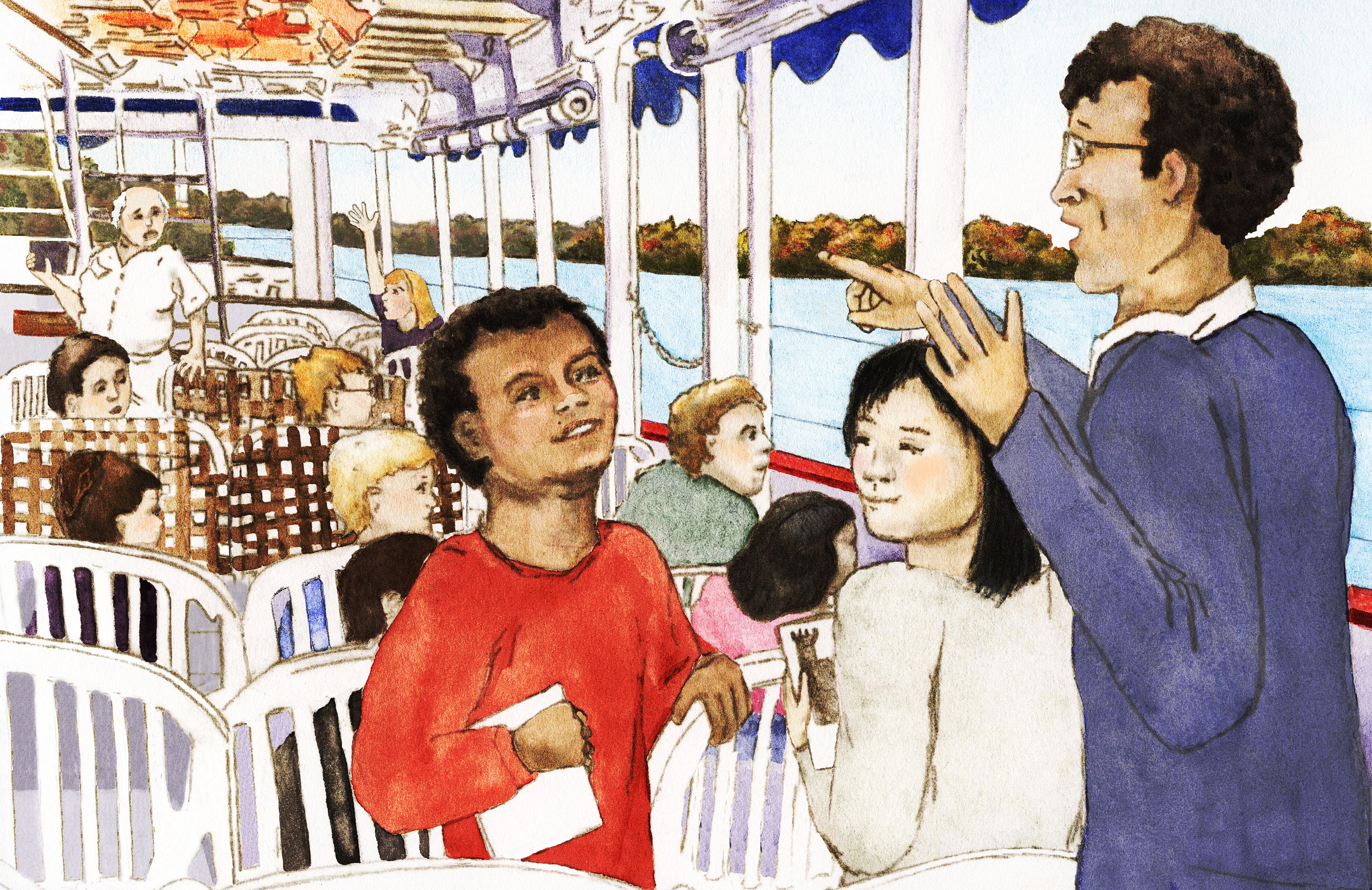