Written by Katie L. Carroll and illustrated by Paul Meisel

When we last saw Thomas and Li-Ming… they were with the rest of Mr. Espinoza’s class on a field trip aboard the riverboat Becky Thatcher as it sailed down the Connecticut River. Their tour guide Norm told the class with the history of Gillette Castle as they approached the ridge where it was supposed to stand, only to find out that the castle had disappeared…

Mr. Espizona and the students stared in shock at the empty ridgeline. Instead of the slate-colored fieldstone of Gillette Castle, there was blue sky.

Norm, who knew the outline of the castle by heart, thought the glaring autumn sky felt empty. The missing castle was like a gap tooth shining in the mouth of a jack o’ lantern.

Li-Ming and Thomas glanced sideways at each other, knowing what the other was thinking as only best friends could. How does a whole castle disappear?

Murmured whispers spread through the deck of the Becky Thatcher. A sudden crack of thunder silenced them. A lightning bolt flashed out of the river and streaked high up into the sky. With a loud gurgling, a whirlpool the size of a circus tent opened up in the middle of the Connecticut River.

The front of the boat tipped and plunged in. Li-Ming clutched her notebook to her chest. Thomas grabbed her elbow, as much to keep himself upright as to steady her.

They circled deeper and deeper into the whirlpool until there was only swirling darkness. There was a loud pop and the boat lurched. A wash of sunlight blinded everyone aboard. The Becky Thatcher had landed on a wide hiking trail in the middle of a forest.

Once the shock wore off, it was established that everyone was okay, albeit a little wet.

Norm turned to Mr. Espinoza with a bewildered expression and asked, “Now what?”

Samantha peered over the edge of the top deck. “I know this place,” she declared. “I come here all the time with my parents. It’s Sleeping Giant State Park. There’s a castle here, too, at the top of the trail.”

“Another castle,” said Thomas. “Let’s go see it. Maybe there’s a clue about Gillette Castle.” He made his way to the stairs leading off the boat.

Mr. Espinoza waved his arms. “Wait, wait, wait.” He surveyed the eager faces of his students and gave a resigned sigh. “Okay, but stay close and be quiet.”

Li-Ming walked shoulder to shoulder with Thomas as they wound their way around the trail and up the Sleeping Giant. Finally they turned a bend and entered a clearing. In the middle, stood a castle.

Norm stared in wonder at the familiar jagged stones that appeared to drip down the castle, like wax melting on a candle.

Mr. Espinoza instructed them to huddle in, and the two adults decided that Norm and two students would go in while the rest remained hidden among the trees.

“I’ll go,” Li-Ming squeaked out, surprising everyone, including herself. This was the kind of thing Thomas would volunteer them for, but Li-Ming’s eagerness to explore the castle outweighed her fear of speaking up.

“I’m in too,” said Thomas. Prepared to defend his right as an aspiring detective, he was surprised when no one else volunteered, not even Miss-know-it-all Samantha.

“Okay,” said Norm, a youthful glint in his eyes that contrasted with the crinkles surrounding them. “If we’re not back in thirty minutes, go for help.”

Except for the occasional rustle of leaves under their feet, silence surrounded Norm, Li-Ming, and Thomas as they crept up to a near-hidden entrance at the base of the castle. They slipped in and made it halfway up a stone staircase before voices erupted on the other side of an intricately decorated wooden door. Norm held a finger to his lips.

A man with an angry Scottish brogue said, “We’re in the wrong place, Iona. Lady Hallow won’t be pleased.”

She began to chant in an ancient language. The three eavesdroppers barely had time to ponder the strange, throaty words before a boom of thunder shook the castle. 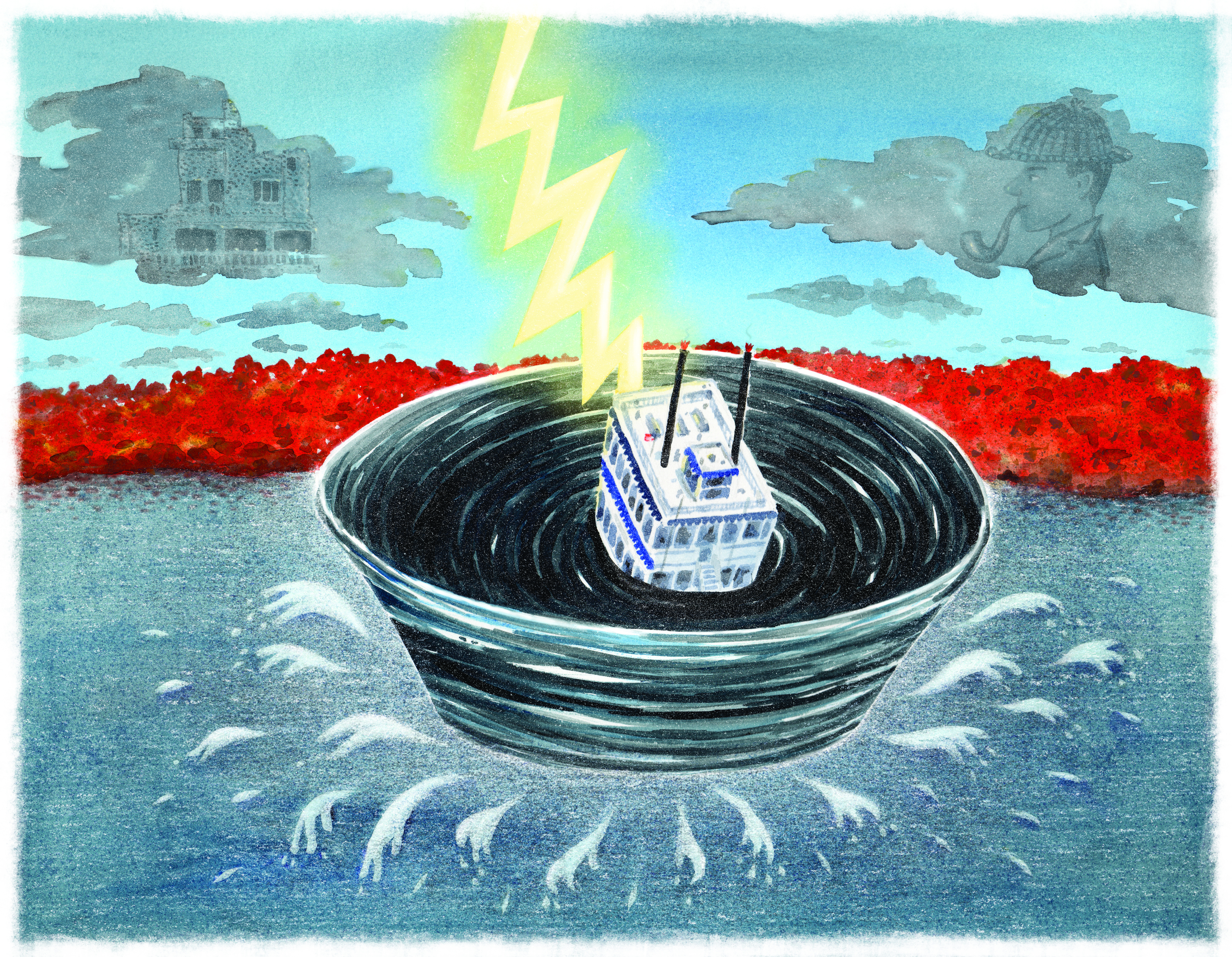 Chapter 1: All Aboard the Becky Thatcher