Chapter 3: Where Are We?

Written by Hope-Denée Fortier and illustrated by Beth Lovell

When we last saw Thomas and Li-Ming… they discovered Gillette Castle misplaced in Sleeping Giant State Park. When they went to find out more with Norm they discovered two villains up to no good in the castle…

The castle shook and shuddered.  Norm, Li-Ming and Thomas held onto each other as the castle was whirling around as if it were inside of a tornado.  Iona’s chanting grew louder as the castle quaked. Then…it suddenly stopped.  They weren’t in Sleeping Giant State Park in Hamden anymore.  From the landing, they could see water outside of the windows across the room, but it wasn’t the Connecticut River.

“Where are we?” whispered Thomas and Li-Ming in unison.

Jasper ran to the enormous glass door next to the grand fireplace and peered outside.  “This isn’t Scotland, Iona!”

Iona scurried over to Jasper. “Aye, you’re right! Look at the strange flowers and calm water.  Where could we be?” she said.

“It doesn’t matter where we are, Iona. It only matters that we are not in Scotland where Lady Hallow is waiting for the castle.  You know that ever since she was a girl and visited Mr. Gillette in his special castle, she’s wanted it for herself,” growled Jasper.

Norm motioned for Li-Ming and Thomas to be very still.

“Let’s peek outside and see if we are still in America,” urged Iona. Jasper unlatched the glass-paned door and they stepped outside.

“Where are we, Norm?” whispered Thomas.

“It looks like the ocean.  Stay here,” cautioned Norm, as he crept down the stairs and quietly crossed the room to peek out of the large window on the other side of the fireplace.

Norm saw beautiful flower gardens, a panoramic view of the ocean, and the stately Harkness mansion, which he recognized immediately. “We are in Harkness Memorial State Park in Waterford,” uttered Norm. “We better get out of here before they move the castle again.”

“Let’s hide upstairs,” said Thomas, as he started dashing up the second flight of stairs two steps at a time.

“Wait!” warned Norm, but it was too late.  Li-Ming and Thomas were already upstairs.

Jasper and Iona were arguing as they re-entered the great room.  Norm didn’t have time to cross the room to follow Thomas and Li-Ming upstairs without being discovered, so he ducked into the alcove by the large window.

“Hold your tongue, Jasper. I can’t concentrate with your yelling.  Close your eyes and concentrate too,” instructed Iona. Jasper and Iona closed their eyes and stood in the middle of the great room in front of the fireplace. Iona began chanting.

The castle began to shake again. Norm peered out from the alcove and saw Iona and Jasper in the center of the room with their eyes closed.  He tiptoed toward the staircase and quietly crept up the first flight of stairs.  He reached the landing and crouched down to crawl up the second flight of stairs.  The castle shook and shuddered just like last time.  Norm crawled along the upstairs hallway and found Thomas and Li-Ming huddled against the wall.  The castle throbbed and whirled as Iona chanted.  Suddenly, the castle stopped moving.

Jasper and Iona opened their eyes and ran toward the glass door.

“What is this strange place?” barked Jasper.  “What have you done now, Iona?” Outside the window sat an enormous dome and mammoth creatures.

“Aye, dragons,” shouted Iona. Norm crawled over to the wooden railing that ran along the second floor hallway and peeked. He could see down through the windows and recognized the massive dinosaur figures and silver dome.

As Jasper and Iona argued, Norm crawled back to Thomas and Li-Ming. “We are in Dinosaur State Park in Rocky Hill,” he whispered.

“Why are they moving the castle around all the Connecticut parks?” questioned Li-Ming.

“They’re trying to use magic to steal the castle and take it to Scotland for Lady Hallow, but it’s not working,” said Norm.

“Who is Lady Hallow?” asked Li-Ming.

“We have to stop them!” said Thomas a little too loudly.

“Who’s up there?” shouted Jasper angrily. 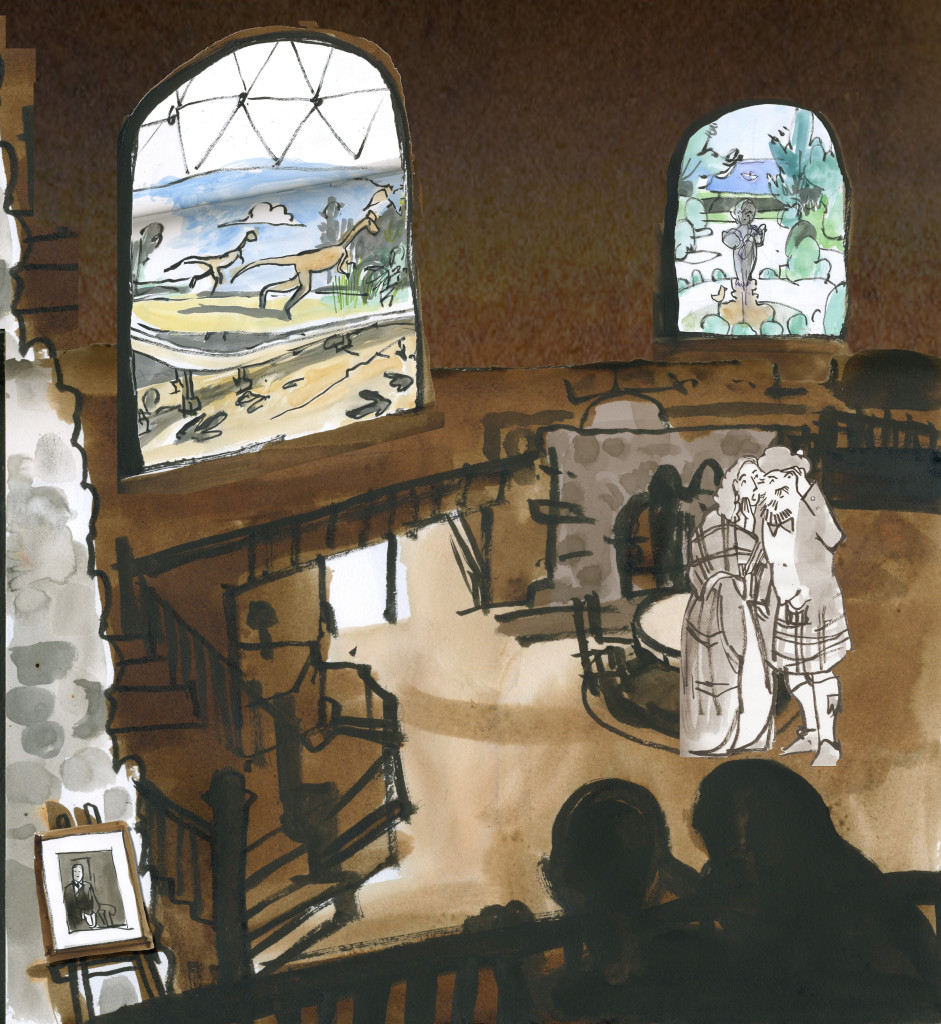