Written by Laura Woollett and illustrated by Marcela Staudenmaier

When we last saw Thomas and Li-Ming… they were inside the castle with Norm when it shook, shuttered, and moved to Harkness Memorial State Park. The evil villains, Jasper and Iona, were using magic to move the castle to Scotland for Lady Hallow, but kept making mistakes. At their next attempt, they moved the castle to Dinosaur State Park, while Thomas, Li-Ming, and Norm were still trapped inside…

“This way,” Li-Ming whispered and then ducked through a nearby doorway. Once she, Thomas, and Norm were inside the room, they pushed the heavy door shut and locked it with the wooden bolt.

Thomas pressed his ear to the door and then shook his head. “I don’t think they saw us.”

The room they were in was small. It held only a narrow bed, a long built-in dresser, a closet, and a bathroom. A window that once overlooked the Connecticut River now offered a forested view of Dinosaur State Park.

Norm sat down on the bed and wiped his sweaty forehead with the back of his arm. “It’s like we’re in a fairy story. This can’t be real.”

Li-Ming paced the room. A couple of wizards trying to steal a castle? It did sound fantastic, she thought. She didn’t remember Lady Hallow from the books she’d read about Gillette, and he’d been dead for years anyway. How could anyone alive today have known him? Unless she really was some sort of witch!

Thomas had been rooting around in the closet and now stepped back into the room wearing a long brown coat and a plaid print cap,  holding a pipe. “Sherlock Holmes to the rescue!”

“Cut it out, Thomas,” Li-Ming sighed. “This is serious! We have to come up with a pretty amazing plan to outsmart these wizards.”

“William Gillette would have defeated them easily.” Thomas tapped the pipe on his chin. “We just have to discover their weakness.”

“And figure out how to get the castle back to Gillette State Park,” Li-Ming added.

On the bed, Norm pressed the buttons on his cell phone. “Whatever happens to the castle is none of our business. My responsibility is to get you two home, and that’s it. I am not messing with these obviously disturbed people.” The phone was dead, and Norm threw it to the floor.

A voice echoed in the hall. “Hand me my wand, Jasper!” Iona bellowed.  “I know how to take care of our little stowaways!”

The lights flickered. All three leaned against the door, listening. Something was coming down the hall. It sounded like the nails of a hundred cats scritch-scratching over a wooden floor.

Thomas pulled back the bolt and opened the door a crack. Skittering up the stairs and down the hallway was a stampede of velociraptor skeletons. Their bones clanked and clattered as they leaped over one another.

“Close the door!” Norm yelled, and heaved his weight against it just as the first dinosaur stuck its skull into the doorway. Thump! It landed on the ground, its razor-sharp teeth still chomping.

Li-Ming kicked it under the bed. “We have to get out of here!”

They could hear the raptors heaving themselves against the door as they tried to get in. It was only a matter of time before Iona and Jasper were there, too. A wooden door was likely no match for their magical powers.

“Maybe if we could find a weapon—something to bat those vicious skeletons away,” Thomas suggested. Li-Ming and Norm checked the dresser drawers, while Thomas ducked back into the closet.

“Our stowaways are in here, Jasper,” Iona’s evil voice cackled from the other side of the bedroom door. “One tap of my wand and …”

Li-Ming raced to the closet. A hidden door had opened up in the wall and Thomas had slid down a long slide into darkness.

Norm was at the window. “Look! He’s outside!” Thomas waved for them to follow.

Suddenly a roll of thunder shook the castle.

“It’s moving again!” Norm said. “Quick, down the passage.” He disappeared through the hole in the wall and landed on the grass outside.

Li-Ming was about to follow when there was a CRACK and a BOOM. The house disappeared with Li-Ming still inside. 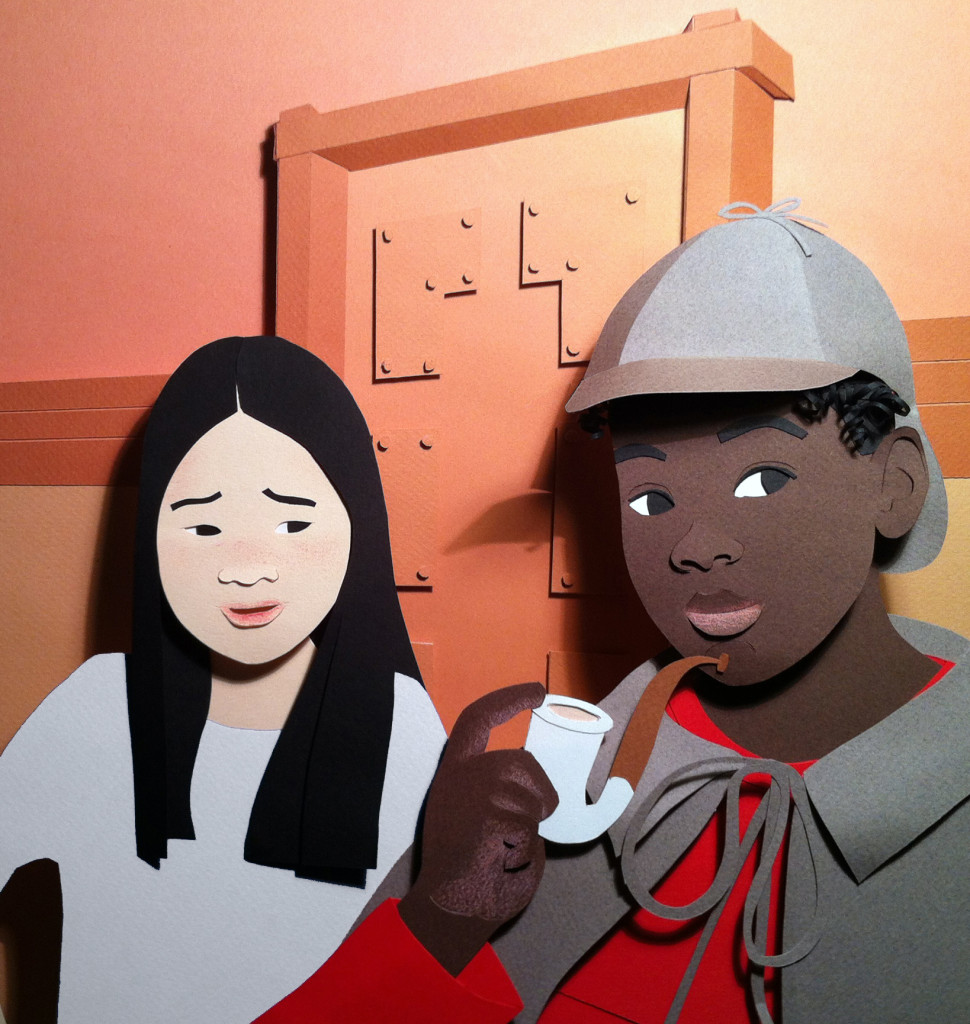 Chapter 5: The Force is With Us