Chapter 5: The Force is With Us

Written by Sarah Darer Littman and illustrated by Jerry Craft

When we last saw Thomas and Li-Ming… they were in Dinosaur State Park trying to figure out a plan to return the castle to Gillette Castle State Park. Thomas even put on William Gillette’s Sherlock Holmes costume to get into the detective mindset, which helped him to find a hidden doorway that led outside. Thomas waved for Norm and Li-Ming to follow, but just before Li-Ming was able to escape, the castle shook and moved again, with Li-Ming inside…

Norm brushed dust off his shirt.

“Good work finding that slide,” he said.  Then he noticed Thomas staring at the castle behind him. The boy’s face was ashen. “What’s the matter?”

Norm swung around and gasped. The castle had disappeared again, leaving them in a field containing a geodesic dome.

“How can we rescue Li-Ming if we don’t know where she is?” Thomas fretted. “What if Iona finally got her spell right and Gillette Castle is in Scotland?”

“That would complicate rescue efforts,” Norm agreed. “But if she didn’t – and I’m hoping that’s the case – where might she accidentally send the castle next?”

Norm suddenly felt a strange tingling emitting from the direction of the dome.

“Feel what?” Thomas paced, pretend smoking the pipe as he imagined Sherlock Holmes would do while pondering clues in a case.

“According to my deductions,” he said, “if the castle doesn’t go to Scotland, it should turn up at another major Connecticut landmark.”

“Well, that only leaves us with hundreds of places to search,” Norm said. “Between state parks and historic sites – we’ve got tourist attractions coming out of our ears!”

That tingling sensation is definitely getting stronger, he thought. “Are you sure you don’t feel anything?”

But Thomas had already resumed his pacing. “If I were Gillette Castle, where would I go next?” he muttered.

His deductive musings were interrupted by a loud humming noise coming from the dome.

Without warning, the briarwood pipe was sucked out from Thomas’ mouth. It flew in the direction in the dome, narrowly missing Norm’s nose, closely followed by the deerstalker, which was swept off Thomas’ head by the invisible force.

“What’s happening?” Thomas shouted to Norm over the racket. “It feels like there’s an invisible hand pulling us.”

“I…think…there…ISSSSS,” Norm screamed as his legs finally gave into the strength of the force field and he found himself flying toward the dome at high speed.

“Not GOOOOOOOOOOD!” Thomas yelled as he, too, was sucked into the force field and started zooming through the air against his will toward an uncertain fate.

It looked like their plan to rescue Li-Ming was going to have to be put on hold.

Li-Ming stared at the closet wall. The hidden door must have closed when the castle moved, and now she was trapped – and alone. Thomas and Norm were back at Dinosaur State Park and she was now stuck at an undetermined location with two newbie wizards trying to transport one of Connecticut’s state treasures back to Scotland for Lady Something or Other. Not your average school field trip, she thought.

She pushed open the closet door slightly and listened. No more velociraptor skeleton noises. No Iona and Jasper either. But Li-Ming did hear another sound coming from the room outside the closet door.

Li-Ming crept out of the closet. Sitting on the bed were two frogs.

Li-Ming remembered that as well as his seventeen cats, William Gillette had two pet frogs, Mike and Lena. She wondered if these two were their descendants.

She didn’t have much time to wonder, because just then there was an explosion of white light and the bedroom door flew open. Iona stood in the doorway, her wand pointed directly at Li-Ming.

“I’ve got you now, my pretty!” she hissed. “Where are your friends?” 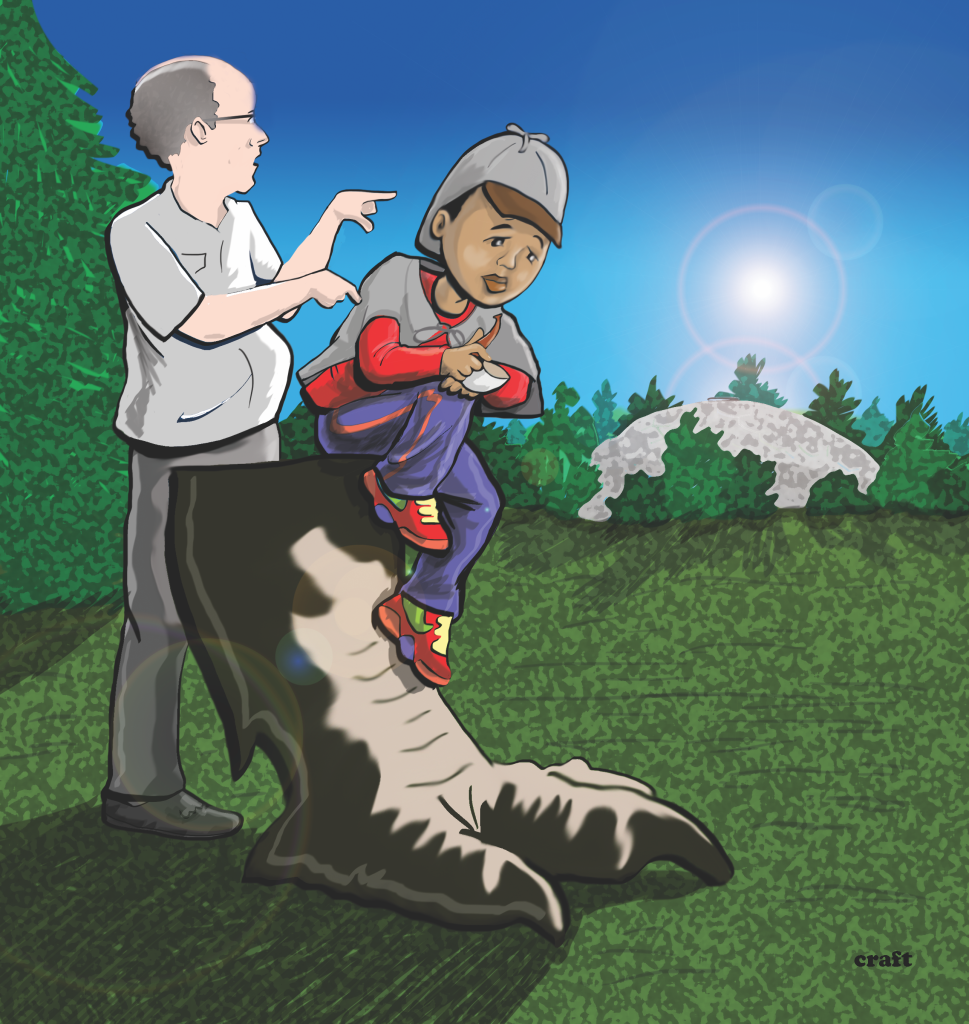 Download a Printable version of Chapter 5 by clicking the DOCUMENT link below: