Chapter 7: The Hallow and the Hollow

Written by J Monkeys and illustrated by Susan Tait Porcaro

When we last saw Thomas and Li-Ming… Li-Ming ran to escape the evil villains and ran into Gillette himself! Li-Ming informed Gillette that Lady Hallow was trying to steal his castle. It was up to the two of them to think of a plan…

Thomas landed on a fluffy pile of leaves with a crunch.

“How’d we get here?” Norm asked from the next leaf pile over.

Thomas picked up the pipe and cap lying on the ground. “I think Iona’s spell pulled the castle’s belongings along with it. Since I was wearing the hat, and you were with me, it pulled us too.”

Norm nodded, willing to go along with that idea. He looked at his surroundings and, after a moment, slapped his knee. “I know just where we are. This is Gillette’s land. The castle belongs on the other side of that hill.”

Thomas brushed leaves off his pants. “Let’s go check it out.”

Gillette’s plan to use the house’s hidden features to steal Iona’s wand then turn her and Jasper into a pair of cats worked like a charm. Gillette tucked the wand into his jacket and led Li-Ming out into the woods. “They’ll be able to get out through the cat door. Now, to solve the real problem.”

“Exactly. Who is Lady Hallow and why does she want your castle?” Li-Ming asked as they walked.

“What do you know about Connecticut’s pre-revolutionary history?” Gillette asked.

Li-Ming blinked in surprise. History wasn’t her best subject. “Thomas Hooker founded Connecticut and did something with an oak tree, right?”

His eyes narrowed. “Wow. Close and yet completely wrong.” He shook his head. “Good grief.”

Gillette sighed. “Like with many historical people, the public doesn’t know everything about Hooker’s life. One thing lost to history is what he did between 1608 and 1618. That’s when he met a mysterious Scottish lass.” A crunch sounded nearby. Gillette leaned forward to peer down the path. He waved her toward a big tree to hide and held his fists up like a boxer.

From behind the tree, Li-Ming could just make out two figures in the distance. Her breath hitched, then gave way to a scream. “Thomas!” She ran down and hugged her friend.

Introductions were made. Thomas was thrilled to meet Gillette, nearly his idol, Sherlock Holmes. He and Norm handled the news about traveling to 1935 quite well, considering. Finally, Gillette continued his story as they walked. “Hooker’s friendship with the Scottish girl didn’t last because he discovered she wasn’t human. She was a fairy.”

“Oh, no. This was no cute pixie. I’m talking about the magical Fae people. They disguised themselves as human, but were actually a breed of evil creatures who planned to work an ancient spell to eliminate most of humanity and enslave the rest of us in their nasty fairy realm.”

Gillette smiled and offered his hand to help her over a fallen tree. “Hooker uncovered the plan, stole the spell and escaped. Now, Connecticut’s early history has two important documents. The first is the Fundamental Orders, inspired by Hooker’s idea that authority comes not from the King, or divine right, but from the consent of the people. The Orders were replaced with another document after Hooker died: The Connecticut Charter. The Charter was famously hidden in an oak tree to stop King James from taking it back, but that was long after Hooker’s time.”

“But what does this have to do with anything?” Norm asked, puzzled. “We overheard Iona and Jasper say Lady Hallow visited your home as a child and wanted it for herself.”

“She often lies.” Gillette turned his piercing gaze on Thomas. “What do you deduce, lad?”

Thomas rubbed his clammy hands on his pants and offered his best hypothesis. “Lady Hallow is Hooker’s fairy and the spell is somehow hidden in the Fundamental Orders.”

Thomas beamed. “But how do you know this? You said it was lost to history.”

“I’m a descendant of Thomas Hooker and a Guardian of the Orders. We’ve kept these secrets for centuries. Lady Hallow has never stopped searching for the spell, though I haven’t seen her in a good many years. The Fae age differently than we do. Lady Hallow was a child in Hooker’s day and has reached a grumpy middle age in my lifetime.”

Their destination was a boulder built into the wall behind the castle. Gillette wiggled some lumps on it and the gang watched in awe as it opened, revealing a hollow interior. “This hollow is a pathway to another world. Like an interdimensional portal.  I’ve kept Hooker’s copy of the Orders, among other things, safe here. But now, I think it’s time to pass it to the next Guardian.”

He guided them into the hollow; they walked quite a long way, then stopped before an illuminated frame hanging on the wall. His face became a mask of horror.

“The parchment is gone!” 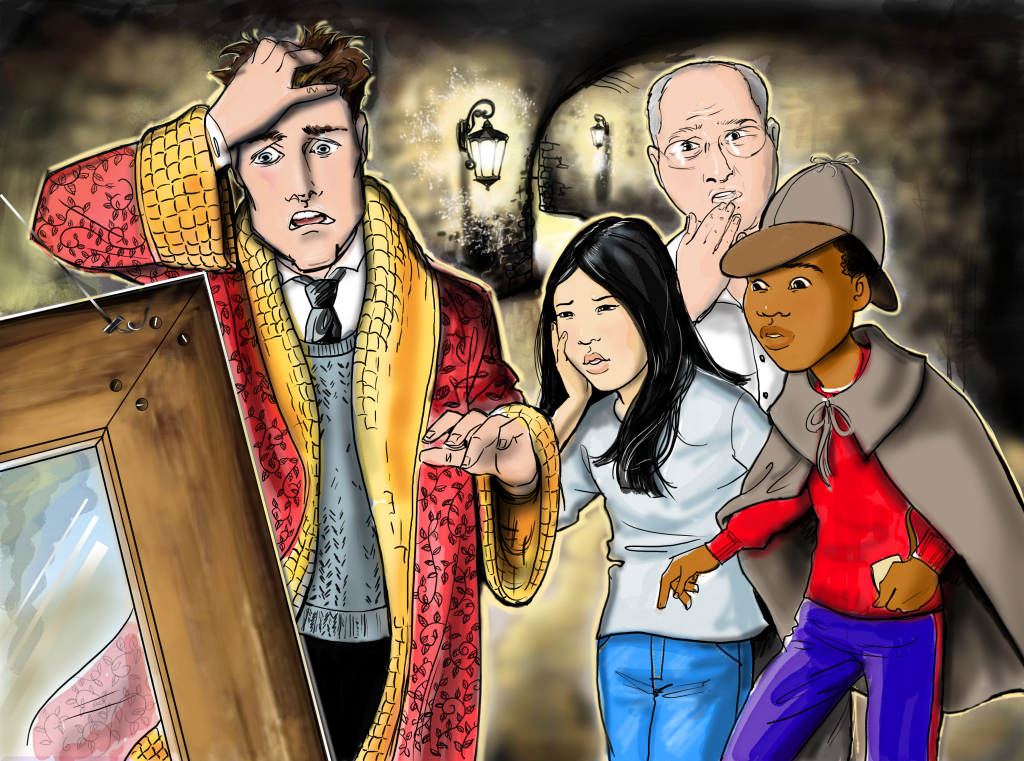 Download a Printable version of Chapter 7 by clicking the DOCUMENT link below: