Chapter 8: Back to the Future

Written by Jessica McCadden and illustrated by Roland Dabrukas

When we last saw Thomas and Li-Ming… A force pulled Thomas and Norm back to the castle because Thomas was wearing clothing that belonged in the castle. Thomas and Norm then found Li-Ming with Gillette and decided they need to find the Fundamental Orders to keep it safe, but when they went to the hollow where it is kept, they discover it has vanished…

“What do we do now?” Li-Ming asked, exchanging a worried look with Thomas.

“Just give me a moment to think.” Slowly, Gillette’s expression softened. “Wait…there’s a story passed down from my ancestors. I’d forgotten it until just now.” Gillette reached toward the seemingly empty frame and the parchment re-materialized. “A spell causes the parchment to become invisible if Lady Hallow or any of the Fae get too close.”

Thomas thought for a moment. “Iona and Jasper couldn’t get the job done, so does that mean Lady Hallow actually came here herself?”

Gillette nodded solemnly. “It’s a possibility. She’s studied the mansion. We have to assume she knows her way around my secret passages.”

“Then she could be anywhere,” said Li-Ming.

“And she might be able to reverse the cloaking spell. I have to move this. Quickly, ” Gillette said.

“What about the Guardian?” Thomas asked. Li-Ming could tell from his expression that he secretly hoped he might be this legendary protector of the Fundamental Orders parchment.

“It’s all part of the spell. When the Guardian is ready, the parchment will find its way to him. Or her.”

“In the meantime, I’m going to take it somewhere safe,” Gillette said. “One of these passages is charmed and leads straight to a secret room in Elm Park.”

“I know that name.” Norm said. “In our time we call it the Lockwood-Mathews Mansion.”

“That makes sense. It was built by LeGrand Lockwood in the mid-1860s,” Gillette added.

“I’ve been there!” Li-Ming piped up. “We went to Norwalk and took a tour…but we didn’t get to see any secret chambers.”

“Listen, I understand that you’ve got to find a safe place for this parchment,” Norm said, “but we have to find a way back to our time.”

“What about magic?” Thomas asked. “If we could get Iona and Jasper’s wand….”

“….maybe we could get back to our time,” Li–Ming finished. “We’re not wizards, but what if we used a spell?”

“It might work,” Gillette said, thoughtfully. He took the wand from his pocket and handed it to Thomas. “Visit my office. There’s a hollowed-out copy of ‘The Hound of the Baskervilles’ in which you’ll find several spells. I, myself, have never used them, but I’ve been entrusted with their safe keeping.”

“Thank you,” Thomas said, shaking Gillette’s hand solemnly. “It was an honor to meet you.”

“Same to you,” Gillette replied. “And best of luck.”

After Gillette disappeared down the passageway, the trio went inside the castle, keeping watch for Lady Hallow. They hurried through the expansive main room that boasted a fireplace so big Thomas and Li-Ming could’ve fit inside it. Glancing around, they entered Gillette’s office through the intricately carved wooden doors with latches he had designed himself.

With the three of them looking, Norm, Thomas, and Li-Ming quickly found the hollowed out Sherlock Holmes novel and removed several small, well-worn pieces of parchment. Together, they held onto the wand and read one of the spells.

“Guess we’re not getting into Hogwarts any time soon,” Li-Ming said. “Maybe we should—whoa!”

Suddenly, there was a loud boom as the castle shook and shuddered. The kids gripped Norm’s arms until the shaking finally stopped.

The kids shrugged and they all went out into the hallway that overlooked the main room. Dozens of people milled around below.

“They’re taking a tour!” Li-Ming exclaimed happily. “We’re back in our time!”

Just then, they spotted a robot rolling through the room. “…took twenty men five years to build this castle,” it stated in an automated voice. “And now, we’ll continue on through the kitchen….”

“I think we went a little too far,” Thomas said, noticing the strange clothes and hairstyles the tour group wore. “This isn’t our time. It’s the future!” 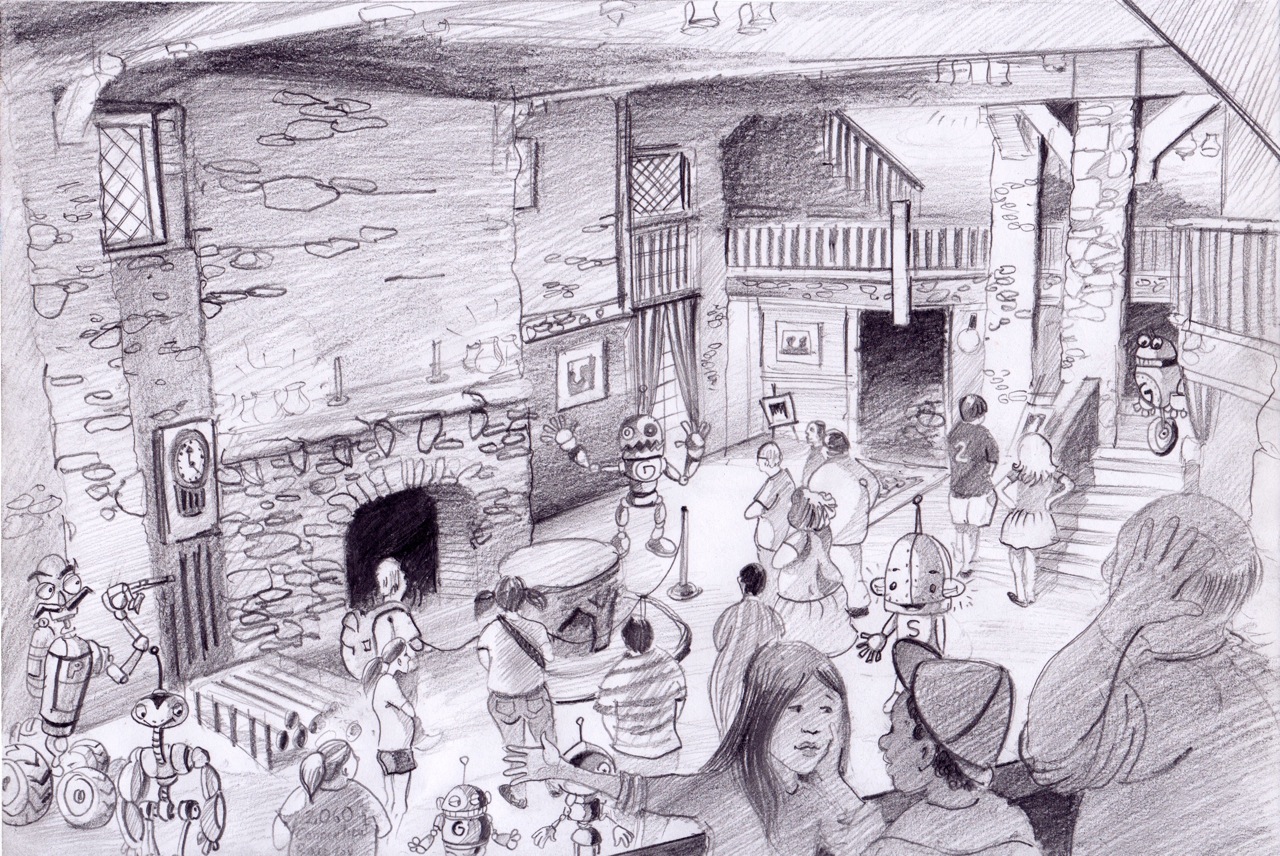 Download a Printable version of Chapter 8 by clicking the DOCUMENT link below: